one for the road 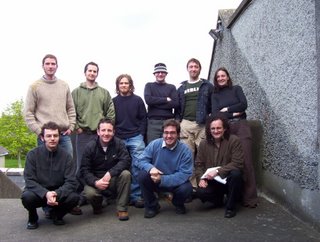 well, the sounds of people moving computers in the next room is reminding me that we will be moving studio very soon, the new place is about ready, its very exciting but also a tiny but sad.
the young irish filmmakers have been part of my life for nearly as long as i can remember.
we have been in this building since 2000 and its really old,cold and grungy but its become home.
still the constant power failures are reminder enough that its time to go.
whats ironic though is that my son Ben, who is ten now, has just joined the filmmakers today.
he's arriving as i'm leaving, which is all for the good and quite fitting really.