More Gobelins goodness - check out the dog and the beautiful bgs!
as I say ALL these students are amazing!
Posted by tomm at 4:29 AM 3 comments:

man this is so class. Students, wha'?
check out the happy little dance on the guy about to be hanged when he thinks they're there to save him. class.

Sure ALL the Gobelins stuff is always so classy. I swear its a good old kick in the bum.
Posted by tomm at 1:36 AM 5 comments:

I've been fighting with the scene where aisling and brendan first meet all week.
I started with nearly the same staging as the first pass. But it was'nt really working with the final location designs and the final voices.
So I started changing stuff - with out thumbnailing on paper - just playing with stick figures.
Just could'nt get there. That stupid thing where I keep asking Nora what she thinks, thinking I'll like it if she says its okay.

Stupid, cos if I'm not happy with it I always have a nagging doubt even if others say its okay. So I showed it to her and Stewie, got good feedback and started to rethink it, again without thumbnailing on paper like I normally would. Just too eager for it to be done like.

Basically got nowhere , but yesterday morning I did that thing where when you are half asleep and you can kind of watch it like on a tv in your head, got some good ideas, but of course I was imagining the voices at the timing that suited the ideas as apposed to the actual timing of the kids voices. So I put it all down fast in thumbnails. Felt good.

Then the whole afternoon was gone on an EFX meeting with Jeremy, which was good, got stuff sorted and Jer got back up to speed. Then getting on with movin' stuff from the house.
Went to a thirtyeth birthday party. Its all weddings, babies and thirtyeths these days. I still remember when it was all 21sts and graduations!!

Anyway did the playing it thru' in my head thing this morning again, came in and plowed all the ideas from the thumbs into Flash really rough.

Finally had the "aw yeh this'll be deadly in colour" buzz going on, and "I want to animate this scene myself" buzz - so was fairly chuffed.

Then I got THE FEAR - like, shit its no good, bloody hell layout is starting in a week , this scene is scheduled to go to layout in less than a month, aw crap its probably all wrong staging wise, , all THE FEAR.

But I showed it to Gav, and he laughed in the right places and said "deadly" even where its really rough and all, and he got it - it read, it played , he knew what was going on with stick man scribbles, so its working i think................

Now I'm going in to tidy it up.

Probably too many mid shots.

We are still looking for experienced 2d animators. Being from the EU or qualified to work here a big help. We are testing people, as the style is quite tricky.
Thanks, 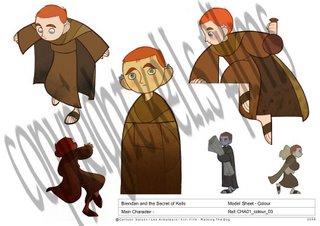 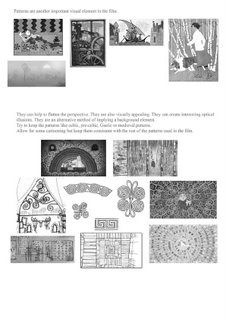 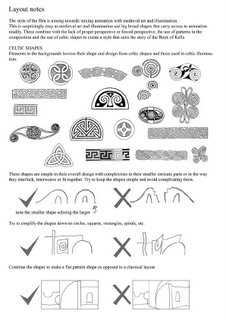 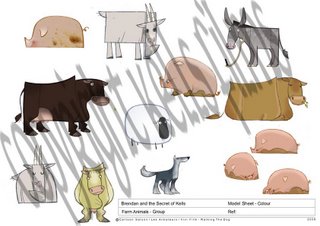 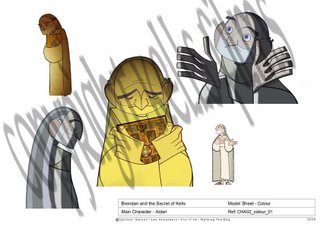 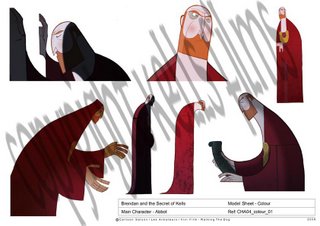 I was thinking a bit about the whole posting pictures thing - I like posting them, just to show whats happening to the few people I know who I don't see too often who drop by, and also because it seems to have gotten a few people in the industry to notice what we are doing and stuff.

Although this started out as a fairly personal Blog to just document what was happening, it soon became obvious that everyone had a sort of misgiving or whathaveyou about the types of things that should or should not be said and put up here, so its sort of evolved into a mixture of personal log and newletter of some sort.
I guess we'll put out an art-of book or comic or something of the development art and preproduction stuff, so while I'm not gonna give stuff away quite as freely or often as before, theres piles and piles more stuff being generated everyday and its nice to give a peek into the production sometimes.

Also to illustrate points and so on.

I've decided to try this - small sized jpgs , with BIG watermarks- hopefully that'll protect the stuff enough and allow us to still make some cash out of an "art-of"-book later ! (evil capitialist cackle MWAHHAHWHAW)

Anyway these are some cool colour models that were put together recently.

Also , a small sample of the layout notes Ross Stewart has been working on, which I think are little mini-masterpieces of information delivery in and of themselves. I sure hope they help everyone stay "in the style".
Posted by tomm at 6:45 AM 12 comments:

yeh its beautiful weather out there , totally like a holiday , kilkenny is great in the good weather in the summer , the cat laughs comedy festival is in full swing and i'm here indoors in work.
well there you go.
Remi is off in Annecy and I'm taking the chance to catch up on the paper boards and models sheets to double check we are okay to start layout in a coupel of weeks.
Each time a new group of artists starts its a bit nerve wracking - hoping we'll be able to hit the style and quotas and all that.
also a whole new set of faces in the place.
anyway putting the voices into the animatic at the moment too.
Lots of hiccups getting the files in a form we could use but we are finally sorted .