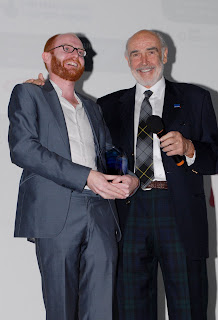 Wow! The first animated film to win it!
When I think of previous winners such as Amelie , Man on Wire , Billy Elliot and The Full Monty , it really feels like a great validation for cartoons in general!
We are all really proud.
Paul "Hollywood" Young jetted into Edinburgh to attend the ceremony this morning and ended up with Sir Sean Connery presenting him the last award announced!
Fingers crossed we get UK distribution signed soon so more people can discover The Secret of Kells....
Photos of Paul and Sean on the way.....

See some photos of the event here, Featuring Sean Connery!
Posted by tomm at 9:46 AM 8 comments:

On Saturday you can go to the Town Hall Theatre to see our new short film OLD FANGS directed by Adrien Merigeau!!!!

(apologies for my error in reading the program yesterday ! - you can enjoy both Cartoon Saloon offerings after all! As the Frameworks plays a whole day before Kells! Hooray!) 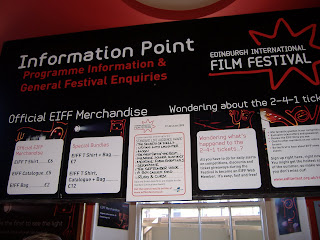 Hey - this is not the final tally - there is a whole week worth of great movies to come, so its fairly likely we will be moved down a notch or three by then but sure its nice to be at the top of the list today!
Posted by tomm at 5:49 AM No comments:

Ok, New Yorkers it looks like this is your chance to see it before everyone else!
Posted by tomm at 3:21 AM 3 comments:

Don't forget if you are in Edinburgh , you can catch the movie again today and Paul young will be there to answer any questions you have afterwards!!
Posted by tomm at 3:11 AM No comments:

Was a success I think.
I was happy my Aunty Carole could be there ;)
Allessandro from Celluloid Dreams is hoping to tie down some Uk distribution very soon.
So fingers crossed.

Anyway after the screening of Kells there was a special screening of Doctor No and Sean Connery walked right past me. This is it I guess. The big time.
Posted by tomm at 2:26 AM 1 comment:

Kecskemet City Jury Prize and Audience Prize! Thats so great! Wish I had been there !
But Fabian has brought the beautiful clockwork trophy and the Ceramic cat we won for the audience award home!
We are very happy...we got something in Zagreb , Annecy and Kecskemet now!

Ahh lovely Edinburgh.
School screening was good fun. Actually this mornings screening for schools was the Uk premiere really , now that I think about it .
But tommorow night is the "official one" - fingers crossed ;) 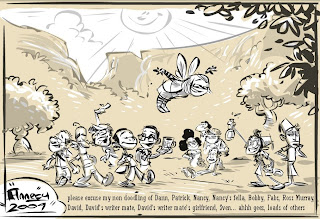 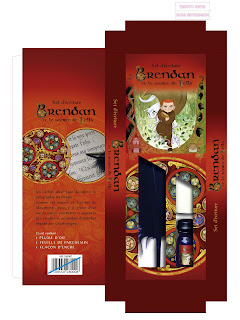 Classy eh? A calligraphy kit for kids..available in France soon!
Posted by tomm at 4:21 AM 2 comments:

What a lovely end to the festival!
We won the audience award from what must be one of the most discerning audiences there is for animation in the world - the audience at Annecy.
Shared a stage with some real animation greats last night .
Even being in competition here is a prize in itself , it really feels like an artistic golden period right now for animated features .

heading home now tired and happy!
Posted by tomm at 2:51 AM 11 comments:

Great screening here in the Grande Salle in the Bonlieu, many old friends and lovely reception from the audience .
Happy Days.
Posted by tomm at 5:49 AM 1 comment:

First day in Annecy has been good craic.
Had a signing session with the comic and saw plenty of old friends and new cartoons.
We are hoping for a Canadian release to be finalised soon, so fingers crossed I will be able to announce that here soon.
Thanks for the support on the Us release, maybe once there is a date we can begin a grassroots campaign to fill up those cinemas over there!
Hooray
Posted by tomm at 10:04 AM 2 comments:

Distribution in the U.S.

So, I can finally announce we have secured distribution in America.
Its a limited release in early 2010 but at least it will be in cinemas over there.

I will post more info as I can, but basically I want tos ee if we can build some kind of support amongst animation fans. A good opening in the limited release would encourage a broader distribution in theatres. Later we will of course have the DVD s over there but our hope is that people will seek it out in cinemas first!

So, if you are in America , and want to see indy 2d animation with non-mainstream subject matter get a chance, please come along and help us get as many "bums on seats" as we can!
Posted by tomm at 5:17 AM 28 comments:

So we got a "special mention" from the Grand Jury at Zagreb.
Lost out on the main prize very honorably to Waltz with Bashir,
but a special mention is nice!
hooray.
Posted by tomm at 8:21 AM 2 comments:

Me and Ben here in Zagreb , its a great festival to be at, unfortunately we cant stay for all of it but its nice to be here anyway...Kells has been playing all over the world lately, Sydney and Istanbul just in the past few weeks.
Glad its getting seen in far off lands thanks to the world of Animation Festivals.
Posted by tomm at 3:11 AM 4 comments: