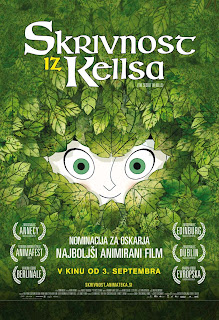 Song of the Sea blog

sorry folks but for now the Song of the Sea blog will be off limits .
Once the finance is locked and we begin production we will unlock it but until then the info is sensitive.
Posted by tomm at 7:32 AM 2 comments:

US Blu Ray + DVD on the way this October! 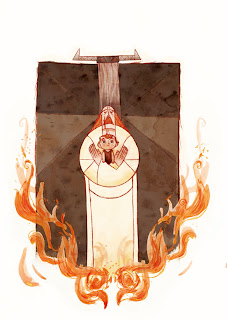 With free prequel comic in the Blu Ray box!
this is a sketch I made for the title page ... not available in the French edition.
Posted by tomm at 10:37 AM 6 comments:

Robert left a message on the last post, and I thought I'd try and answer it if I can -
Robert wrote a very thoughtful review not long ago which I posted here.
He seemed very sensitive to all the subtle textures and depths we hoped had been layered in over the years of development which of course is very gratifying for us as filmmakers.

"Hi, Tomm, I have a question here and I mean no offense. But since the subject has been brought up by Mr. DiGiovanna, about the deeper appreciation of adults and kids coming from the same source, I'm wondering if there's another special reason why Brendan's image appears on the Chi Rho iconograph. To be honest, I initially thought that scene to be a form of defacement, albeit a mild one. I had put this interpretation behind when others took its place. It was my recent noticing of something strange about the Abbey which brought it up again."

The idea behind placing Brendan in the Chi-Rho page was a response to some people feeling unsatisfied by the ending on the Chi Rho page, I understood their concerns and we had an early storyboard and script draft that returned to the abbots room after the Chi rho sequence and tried to wrap up the story and characters. This was always unsatisfying and seemed like an epilogue , the story is over with the completion of the Chi Rho page and all it symbolizes for our characters and for history.
We could see that it would only be a design and story "anti climax" to continue the story after that final sequence, and felt it was the Abbot Cellach's death sequence, who could be argued is in fact in some ways the hero of the story, his redemption, his glimpse of eternity in the Chi Rho page. The chance to reprise the main characters in the details of the real Chi Rho page was there,
Brendan growing from boy to man is seen in the way a stylized Brendan transforms into the human head at the center of the real page, Aisling is remembered in the flowers that bloom when a mist passes over them and we see Pangur in the cats that are present on the actual page too. Initially we planned to have Aidan and Cellach unified in the image of the two angels holding the book between elsewhere on the Chi Rho page, but it felt too labored and we left it out in the end.

I hope that answers your question sir!
Posted by tomm at 6:53 AM 1 comment:

While reviewing a film, I like to point out that only a certain subset of the population will enjoy it. For example, if it's something like Saw or Hostel, then I assume that John Yoo and Jay Bybee will want to see it; if it's Sex and the City 2, then I urge paleontologists to give it a look.

The film was nominated for the Oscar for Best Animated Feature, though it lost out to something sappier and far-less inventive. Perhaps that's because, instead of the usual three-dimensional, computer-generated attempts at realism, Kells is, like nature and God himself, gloriously two-dimensional. Taking its cue from the eighth-century illuminated manuscript "The Book of Kells," the film is filled with Celtic knots, gilded letters and swirling, circular images that gather up characters, trees, buildings and wolves into undulating, abstract images that tell a clearly delineated story.

Ten-year-old Brendan (the voice of Evan McGuire) lives in the Abbey of Kells, a walled fortress controlled by his uncle, the Abbot Cellach (Brendan Gleeson). There, frightened villagers await the arrival of the evil Norsemen, while a team of scriveners and illuminators work on the ornate manuscripts that Irish monks preserved throughout the Middle Ages.

All of the monks revere the legend of Brother Aidan, the greatest illuminator of all, who lives in far-off Iona. In a glorious, dreamy sequence, we see the island of Iona—a bulge of green in a gold-and-blue sea—attacked by the Norsemen. The raiders are represented as elongated rectangles with horned helmets, fiery eyes and flaming swords burning the island to ash. Brother Aidan flees and arrives at the mechanically complex Abbey of Kells, where the Abbot Cellach devotes all resources to building walls in an effort to keep out the barbarians.

I could imagine that if you were a Norseman, you might be offended by the depiction of your ancient kinsfolk as violent rectangles. But archaeological evidence and Molly Hatchet album covers do suggest that the Vikings were not peace-loving philanthropists, as their descendents—Bjorn Borg, Brigitte Nielsen and Dolph Lundgren—would have us believe.

In spite of the anti-Norse bigotry, Kells is a deeply sensitive film. The focus is on Brendan as he learns, against his uncle's wishes, the art of illumination. In the process, he acquires a deep relation with Brother Aidan, and with a mysterious woodland girl named Aisling, both of whom help him find his artistic voice.

But the true charm of Kells is in its visual beauty. Modern animators seem to have forgotten that highly modeled images in perfect perspective, while certainly truer to naturalism, are not inherently superior to thoughtfully styled, if somewhat more abstract, modes. In Kells, for example, perspective is flattened out in the manner of a medieval mosaic. This allows the animators to produce thematically recurrent images that evoke the enchanting styles of ninth-century Ireland.

Frequently, the characters stand in the middle of highly ornamented concentric circles. One such image is formed by stairs in front of an altar; in another, a ring of wolves encircles frightened monks.

All of this is evocative of the animation styles of the 1960s and '70s. Combining the inventiveness of Fantastic Planet, the geometric abstraction of The Point and the psychedelic swirls of Ralph Bakshi's skies and landscapes in Wizards, Secret of Kells is like a soothing version of an acid trip, only with more monks and berries.

The imagery isn't mere window dressing, though; it's deeply involved in the film's smartest themes. For example, in the forest, trees form endlessly ornate patterns that mimic the knots and twirls of the decorative styles of the monks' border designs, hinting that the mechanical world of the monks has its inspiration in the woodland areas from which they've walled themselves off. But nature isn't simply romanticized in the manner of Avatar's semi-literate smurf-porn. Instead, Kells allows the trees, plants and animals to show a natural world that is vicious and beautiful at the same time.

So I hope everyone will go see Kells. It's the very rare case of a film that children and adults will find equally enchanting. The adults' entertainment doesn't come from winking and going over the children's heads, but from a deeper appreciation of exactly those same elements that are captivating the kids.