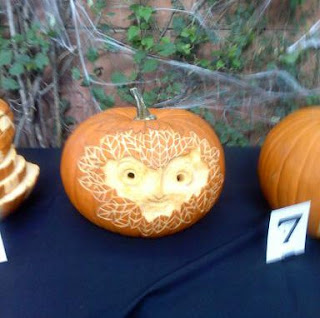 My thanks to Jamie and Rodolphe for showing me this cool Aisling Pumpkin . I think its from a pumpkin carving show in Dreamworks.
Posted by tomm at 10:51 AM 4 comments:


The nice thing about the list is teh artwork they used to illustrate it is often not screenshots.
Coraline is represented by a modelsheet drawing by Shane Prigmore for example
and Aisling has a nice rough modelsheet drawn by Barry Reynolds.

Well new to me anyway. This stuff blew my mind in college. Still does.
Posted by tomm at 2:44 AM 1 comment:

Since we wrapped and still I'm enjoying Reading reviews abd tweets, blogs and
mentions from people discovering thus film fir the first time.
I bought empire yesteday and there was the review on paper in the magazine
I always read.And The DVD release in the uk is very soon actually.
I think the us DVD bluray and especially netflix (number one for instant streaming the day it was released!)release has allowed more people
than ever before see the film. That's what it's all about really.
It was slow to finance, slow to make and slow to find a large audience but I feel like we are getting there the same way , slow and steady. Maybe it's good this way , it all lasts longer and doesn't fizzle out so fast.
Posted by tomm at 2:00 AM 12 comments:

Back on the auld sod

Many thanks to everyone in sf Portland and NYC who cane along to the screenings and the panel in nycomicon ! I had a great time ,but glad to be home.
Posted by tomm at 3:12 AM 5 comments:

Wow an amazing day , I have never been to a ComicCon on that scale before. Its quite surreal and intense.
Thousands and thousands of serious comics, anime and cartoon fans in all sorts of get ups.
If any of you readers are here in NYC tmrw please do come along to our panel and we'll be selling comics, books and DVDs afterward with sketches too!
Posted by tomm at 8:02 PM No comments:


I agree with those of you who contacted me saying they felt the movie was not "strictly for kids" kind of a strange review, although positive they seemed to miss some of the denser layers of meaning I guess.
Anyway I'm still pretty happy with the general press response in the UK. A friend told me yesterday that theres something in Sight and Sound this month too, so I'm looking forward to picking up a copy of that too when I get home.
Posted by tomm at 9:09 AM 2 comments: 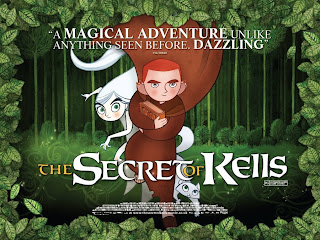 And don't forget to if your in the US you can buy the DVd or bluray in your local Target, Best Buy or Barnes and Noble tommorow!
Posted by tomm at 7:03 PM 5 comments:


“Old school and proud of it, it's no surprise this toon earned an Oscar nomination earlier in the year...Strike a blow for tradition and see it”

"...THE SECRET OF KELLS is a hand-drawn Celtic extravaganza....Take a child to see the inspiring KELLS rather than Garfield's Pet Force 3D"

"...The look of the film is simply ravishing. The highly stylised images...are all realised with a gorgeous intricacy".

"This Irish animated feature looks great. But it's strictly for kids"

"The artistry is beautiful, the tale of courageous quest affecting. But children addicted to showier...3D might chafe at something of subtler (although frequently scary) style"

“It is the original animation that draws you into the film which parents may take their children to without fear of adult boredom.”

“A compelling animated film for children – and an artistic delight for adults.”

“Irish animation whose vibrant, intricate aesthetic is in tune with its monks and illuminated manuscripts.”

“Intricately gorgeously drawn, the story of Ireland’s medieval Book of Kells is a complete and magical delight.”

“The quirky style of animation echoes the drawings and calligraphy of the Book of Kells itself, while the mesmeric tale weaves myth and magic together with the historical miracle of the book’s own survival through fierce and freezing times.”

“It’s about the creation of that which endures and asserts both man’s faith in the spirit and his celebration of the beauty of this world.”

“The story is certainly enchanting and should appeal to smart children.”

“The film is still a treat, thanks to its stylised, kaleidoscopic artwork.”
Posted by tomm at 6:24 PM 2 comments:

Check out the Kells graphic novels on line at comixology -

I also saw a cool Secret of Kells viewmaster today in the offices of New Video our DVD distributors.
I'm looking forward to the panel at the NY ComicCon this weekend .

Mr.David O'Reilly just buzzed into NYC tonight too, looking forward to hooking up with the original inspiration for Brendan's design in person again .
Posted by tomm at 6:14 PM 1 comment: