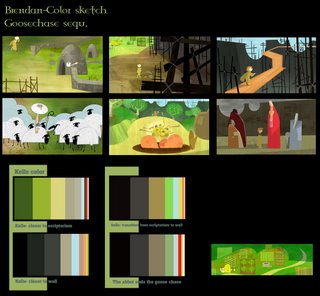 i thought it might be cool to do a short post about the way the film is financed and how it will be made.
I would have loved some inside dope like this back when we were first figuring this stuff out so I hope this is helpful to any one out there thinking of trying to produce something.
Well, also this is primarily a personal blog so I should say this is my take on it and how its shaped up for us so far, I guess no two projects are financed the same and I am surely no expert on these things.

But anyway - Brendan is a co-production between Les Armateurs in France , Vivifilm/Walking the Dog in Belgium and ourselves in CS.
The project orginated as a basically totally different story set in the same period and with similar characters here in CS. We brought a trailer (which we made straight of college with some funds we got from a government scheme through Young Irish Filmmakers) to an event in Germany called Cartoon Movie.
Cartoon Movie is an event hosted by an organisation called Cartoon, which is funded in part I think by the EU (though you pay big bucks to go to it) ,and basically its a forum to pitch projects to potential investors/distributors and co-producers.

We partnered up with Les Armateurs who had had great success with Kirikou and were just begining production on The Triplettes of Belleville at the time. They were working with Vivifilm and Walking the Dog in Belgium on some 3d and 2d parts of Triplettes.

The budget of 5.35 million Euros was raised in each country, with each country raising their part of the finance to cover the part of the production they would take control of.

So we are looking after the pre-production up til layout and 20 minute of animation here in CS.
Les Armateurs are looking after additional BGs , 35 minute of animation (which they will outsource to Kecskemet Film in Hungary) , post production and music.
Bruno Coulais is the French composer who will work with Irish group Kila to do the score.
Fabrice Ziolkowski is the screenwriter brought on board by Les Armateurs who helped redefine
the story and characters.
Didier Brunner is the producer for France.

Then in Belgium, producer Vivian Van Fleteren is raising the cash for the CG elements and 20 minutes of animation. Then she is working with production house, Walking the Dog to do the actual artwork. They have a beautiful studio in the centre of Brussels. Ace animator Benoit Feroumont is heading up the 2d team there with Anton(Toon) Roebens on the technical end of things. The Belgians will also handle ink and paint. They will fund the clean up also which is outsourced to Eastern Europe most likely.

So this, complicated and spread out production/financing method is almost standard now in Europe it seems, some great movies have been made this way and a few not so hot ones too I guess.

Its a big challenge and its all ahead of us still, but we hope with enough planning and good design upfront we can pull it off. I know our partners are experienced in this way of working but I'm sure it'll be a bumpy ride at times. We hope to do a good enough job to raise the money for another film, that hopefully won't be as spread out or as low budget.

The cash from Ireland was raised from The Irish FilmBoard, the national broadcaster RTE, distributor Buena Vista Ireland and then we shared in the international deals with Celluloid dreams and Eurimages and so on.

It took about 5 years from the first version of the film until production began to raise the finance and find all the partners and there were long stretches where it seemed like a pipedream in the distance while we strugged to keep the studio alive with service work and commercials.
We invested about 200,000 Euros in to the project in swaet equity and expenses to raise the budget we did.

I hope thats interesting...for me starting out this stuff boggled my mind, and it still does. A set-up as complicated as this has so many pitfalls, but we are determined to make this thing now, and like a snowball, it seems to be rolling ever faster and getting bigger.

So , eh, thats it as they say.
I'm off to meet up with a potential life model so we can get life drawing going again in the new studio.
nice one.

P.S. added some colour sketches by Todor Polson, just to liven up this texty entry!
Posted by tomm at 5:08 AM