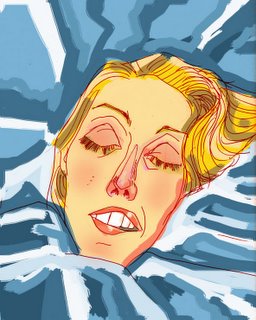 well here I am in work again listening to laura veirs and still not really "in" the sequence.
gotta just blast into it and then go back and look at it.
heres a sketch of the lovely liselott "the head in the bed" that I coloured up to get warmed up or to avoid the storyboard problems not sure which yet- bit of both I guess heh.
Posted by tomm at 8:37 AM No comments:

well, its 4.30 am or so I can't sleep , this is normal for me. I had a pretty unproductive week personally, did'nt do much art, just some character poses and a tiny bit of boards. I figure i need to make 20 secs of final boards a day on average to finish the sequence i'm on now. the time goes between feeling like crap with this bug going around and the stresses of the producing end of things. most of the week my head has been on finincial crap, very stressful trying to think of the cash flow and absorb the problems of finance. I am determined to create a document to remind me of all the intricacies for next time! But my partners in the Saloon are all on it so I know we'll pull through!
Anyway my head is racing around art problems mainly tonight. In the main things are going very well, Ross Stewart made one of the Best bgs yet today - the abbots room in the storm it looks great. The model sheets are coming together but the inconsistencies need to be ironed out - very small and minor things but we really need the model to be rock solid so it does'nt wander in animation.
We reckon we'll need an a new assistant director as Remi is so busy with the boards right now.
Jeremy and Lorraine were down today - they live in Galway and are looking after the effects. we saw some good stuff today - just needs to go a little more stylised and simple. It sometimes seems like a detail to me, the effects, but well designed effects will really tie the whole thing together.
Fabian has been working on the animation test and it looks well, he is figuring out a lot of stuff and one thing i know is that we will probably loose a bit more detail on the characters before we are through, the big thing on Brendan himself is the cape - its too much extra hassle, we'll keep it only for certain sequences.
Jean Baptiste is back on the Vikings and I am eager to see a test in CG to know if thats the way to go with them or not.
The animatic is nearly done with the temp sound, its exciting to see it coming together but itt'll be a very busy three months now finalising the boards - all the directing needs to go in there and I;m busy on a lot of stuff. Great to have Nora involved though - shes really the glue that'll stop it going all lopsided - shes keeping a great overview on it all.
well feet are freezing - back to bed I go!
mind devulged of the main worries!
back to work tommorow!
Posted by tomm at 8:37 PM 2 comments: 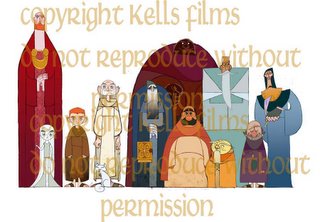 well thought i better update.
had a frustrating week with delays in finance and premises, but at least the finance seems to shaping up so we soldier on. this old place will do us for a while longer!
thought i'd try this watermarked thing - maybe its enough to protect the art-
much of this stuff is'nt so far from whats on the website anyway.
must lookinto whether or not its cool to update this blog with new art.
think it would be cool. still theres zero traffic here so i guess i'm just doing it for me.
hi me.
Posted by tomm at 5:05 AM 3 comments:

Til next time Todor!

ahh sure no post for a week or two and then a couple at once.

drawing a bit more now. work breeds work. i guess its like excercise - so easy to put off.

one of the best things about this production is working with experienced and taleted folks.
our colour script is being created by tod polson, although we originally planned for him to
stick around and be head of bgs ,another production has greater need pf his powers and he cannot ignore this great burden of responsiblity he bears so , sadly he is departing us tommorow!

a real nice guy - check out his gorgeous film - www.pumpkinlove.com
its a really mighty cartoon.
anyway i learnt a huge amount from Tod and I'm sure we'll work together again soon.

also he got me started weight training which is one of those things I just never wanted to start without someone showing me the ropes. As well as a superb colour stylist Tod was once a champion power lifter- some combo...
Posted by tomm at 3:41 PM No comments: 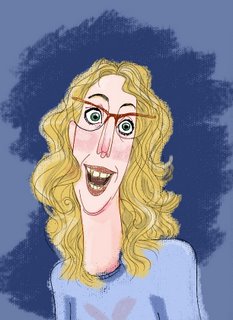 well, i realised this blog business may be a bit boring since i cant post too much new art as its better to keep those types of things mysterious for legal reasons, so i'll just keep this up as little personal blog more than anything. a good place to record how things are generally.
well, the weekend was spent mostly trying to finish the "honeymoon" sequence in final board form.
finding it hard going back and forth from paper to flash, trying to make good drawings and have a sense of the timing and all too.
obviously its not an actual "honeymoon" thats just what we've been calling it!
i aslo realised again how little i know , i reviewed a prospective animators test and basically failed to see how strong it was, because i was so distracted by the model being a bit off!
the fact is the model sheets we did for the test were quite early and so not that consistent, so it was'nt too easy to be "on model" for anyone!
It took Nora "brains of the operation" Twomey to point out the strengths, but then I guess thats why shes animation directing and not me....
anyway working with such talented folks can be depressing sometimes but the thing to do is keep trying , keep learning I guess.
heres a silly cartoon i did of the beloved wifey liselott -
Posted by tomm at 1:47 PM No comments:

despite my reservations about being biased by techinque in this tiny world of animation I must say all the same that
its great to see high quality 2d animation getting made - whether the big american studios value it or not!
Posted by tomm at 12:32 PM No comments:

Well,
a new year and back to work!
It does'nt take long to get back into all the stress of production.
The place is getting very cramped and we are reorganising our space a bit to
accomodate a better work flow. Hopefully we will be in a nice new space before too much longer.
I spent much of my life in the current space and though it has a lot of memories (I even met my wife there) I will be glad of the "fresh start" feeling in the new place.
Of course there won't be too much time to feel anything as we are getting super busy.
Its quite a stretch to keep an eye on everything as it is.
We have a great, great team of new and old friends though.

So here is the current line up -

Tomm Moore - Director (storyboarding a lot at the moment too!)

Nora is the most experienced and rounded director in our studio - her first film From Darkness has won many awards , as has Cuilin Dualach (Backwards Boy) and Celtic Maidens her other two shorts. Much of the crew on Brendan worked on these films too, so its a nice family atmosphere in a way.Nora is essentially co-directing with me on Brendan.

Remi Chaye - assistant director - a super all rounder guy from France, never met him before
this production but he soon became totally invaluble.
Remi has made some amazing short films - usually entirely on his own. He has worked on loads of productions in France as well. He is currently developing a beautiful feature film set in Russia and the far North.

Ross Stewart - Art Director - resident genius - boy I hate this guy, hes just plain good at everything, I knew him since he was 12 or 13 and he has ALWAYS been brilliant. He worked with us on a lot of Saloon stuff, most recently Cuilin Dualach, and hes just plain amazing as a designer, background artist, painter, musician and most other things too. He also has'nt even got the decency to be a jerk so we can hate him.
At least hes few months older than me. hehe.

Barry Reynolds - Lead Character design - another old Saloon friend and another genius. Just the best drawer I ever saw and good at pool too. He has worked with me to finalise all the main characters and has designed a lot of the secondary ones himself .

Jean Baptiste Ven Damme - character design and modelsheets- A veteran of Cuilin Dualach - he jacked up the standard of character animation no end on the doctor character - you gotta see the film to see what I mean. Hes an absolutly amazong designer too. His own style is pretty scary stuff so we got him to do some Vikings for us - man, they are pretty far out! He is currently working on the modelsheets and helping figure out how to pull off the difficult flat style we are attempting.

Tod Polson - Head of Bgs - I call Tod the Forest Gump of animation. Except he ain't stupid, no sir. He seems to have either studied with or worked with every cool person in animation, and hes still friends with them all too! He is currently knocking all our socks off with an amazing color script based on the rough storyboards.

We have recently been joined by super talented French back ground artists - adrien and lily - but more on them next time - right now I better go do some work!