Thanks to everyone who came to our screenngs n Tokyo , always glad to see
a full house!
The supefans who already knew about the film
were such a boost! Thank you all for coming and waiting to chat.

I had time too for a lovely visit to the ghibli museum and
to see some of Tokyo... An amazing place!
Posted by tomm at 11:52 PM No comments:

Hooray, thanks all who came along! The signing session was fun too, lovely to meet you all.
I was impressed with how many people had already heard of our film, especially the guy who had bought
the book from France!
Posted by tomm at 10:35 AM No comments:

Well here I am with young Ben in Osaka Japan. We have some screenings here as part of the European Film festival. We've never been to Japan before it was as amazing and overwhelming as I expected yesterday , walking around with jetlag!
Luckily we hooked up with an old Ballyfermot college pal - Dave "Yer man in Japan" McDermott who was a able to give us a fascinating insight into the place as we walked around the Osaka castle and city centre.
He is a fluent speaker of Japanese and  had an interesting insight into the difference between cultures because of language. He feels Japanese people think much more visually because their language is pictorial . It would explain the fact that comics and animation are so much more part of mainstream culture here .

We have the first Japanese screening that I've been aware of today, I hope we get a good crowd and that they enjoy the film. Having been compared to Japanese animation so often in the States it will be interesting to see what Anime fans make of it here!
Posted by tomm at 2:54 PM 2 comments: 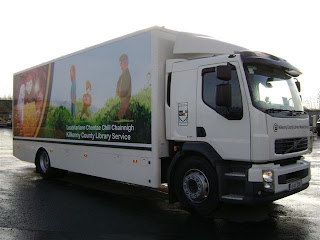 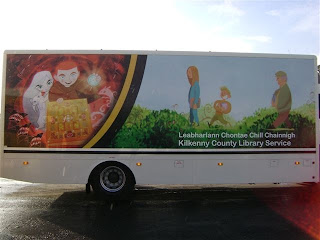 All knowledge would be lost for eternity.

heres Kilkenny county library mobile unit , bringing books to the people...so they may have hope.
and its got a nice decoration on it now too ;)
Posted by tomm at 9:38 AM 4 comments: