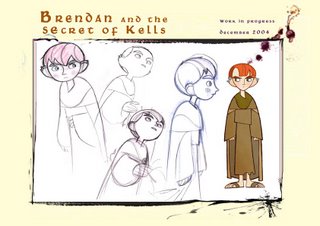 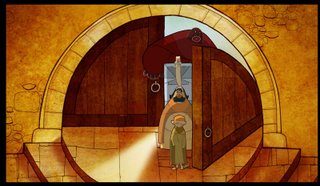 heres some more random things from my desktop -
a colour model for aisling based on martins clean up drawings
a page of sketches from when we were trying out different hairstyles for Brendan.
and an old scene illustration of a deleted scene by Adrien Merigeau characters drawn by Jean Baptiste .


its the end of the week cos tommorows paddys day. ah yeh parades and all that.
pity everyone will be mainly getting sloshed.
i suppose we have a stereotype to maintain. sure feckit i may as well join in.

anyway just a quick note - good news today that Brendan Gleeson has been confirmed as the voice of Abbott Cellach - He is a class actor probably his face at least is quite well known by now.
He's perfect as the Abbott - he is a long time friend of the project and was orginally slated to play the lead character in a previous incarnation of this project many moons ago.
Its great that he'll be involved now.
So thats cool anyway.
The other cool thing has been all the comments and feedback.
thanks to all who stopped by. I clicked through a few of the blogs of people who left comments -
amazing amount of excellent artists out there doing their thing.
Big thanks also to www.drawn.ca for mentioning us - esteemed company to be sure.

Anyway sin é anois, I'm off to watch the Royal Tenebaums with the missus,