Hello from Essen in Germany, we are here for the European Film Awards,
Being one of three nominees for best animated feature is massive for us especially as the other nominees are of such high quality, Mia et le Migou and Nico and the way to the stars, it will be a fun night.

last night Ken Loach had a conversation about film, politics and all kinds of stuff before screening his film starring Eric Cantona!
It was a very moving conversation and in the end he asked the audience to make some noise about Western Sahara and the plight of one their leading human rights activists who is currently on hunger strike in Lanzarote airport.
i dont have much way to make noise but the eyeballs on this blog are the most direct access i have to the most people so heres my tiny contribution to making her plight known....

and heres a link to the guardians coverage of whats going on ... 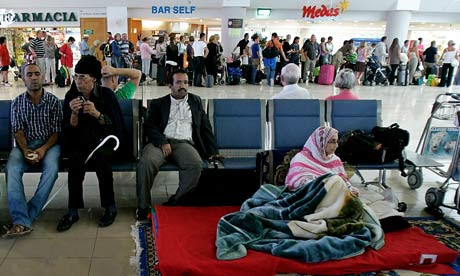 Western Sahara's most prominent human rights activist has gone on hunger strike at a Spanish airport after being expelled from her home country by Moroccan authorities.

Aminatou Haidar, who is viewed by her supporters as the "Sahrawi Gandhi", was deported to Lanzarote from the disputed territory of Western Sahara on Saturday. Morocco has occupied the former Spanish colony since 1975, refusing a say on independence to the indigenous Sahrawi population, including some 100,000 people still living in refugee camps in the desert in south-western Algeria.

Haidar, a 42-year-old single mother, was detained at the airport in Western Sahara's administrative capital, Laayoune, on her return from the US, where she was awarded the Train Foundation's Civil Courage prize of $50,000 for her struggle for the Sahrawis' right to self-determination. After refusing to declare her nationality as Moroccan on the airport arrival form, the police confiscated her passport and she was flown to the nearby Canary Islands.

Haidar told the Guardian by telephone that Spain was "complicit" in her predicament, both for admitting her to Lanzarote and then refusing to let her leave.

"I will carry on my hunger strike until the Spanish government accepts its responsibilities and allows me to return to my homeland, where my children live … or I die," she said.

Prison in Western Sahara was preferable to detention in Spain, she added.

Haidar has wide experience of incarceration. In 1987, aged 20, she was "disappeared" and tortured by the Moroccan secret police for more than three years for advocating independence. In 2005 she was jailed for seven months after being beaten by a Moroccan policeman during a demonstration protesting against the Moroccan occupation.

The Spanish foreign ministry said could not allow Haidar to return to Laayoune because she had no passport. The Moroccan government, which considers Western Sahara to be its southern provinces, even though this has no foundation in international law or formal recognition from any other country, has denied any wrongdoing. Instead, it has accused Haidar of treason and of being agent of the Polisario Front, a Sahrawi nationalist movement that fought a 16-year desert war against Morocco with backing from Algeria.

The conflict ended in 1991, with both parties agreeing to a UN-sponsored referendum on self-determination – including an option for independence – for the Sahrawi people. But Morocco has consistently blocked the vote, and the Polisario remains in exile in Algeria, behind a massive sand wall manned by tens of thousands of Moroccan soldiers.

In recent years King Mohammed VI has said independence is no longer on the table, with autonomy now the best available option for Sahrawis. On 6 November, in a speech marking 34 years of Moroccan presence in Western Sahara, he hinted at harsher action towards anyone still questioning the claim of sovereignty.

"One is either a patriot, or a traitor," he said. "Is there a country that would tolerate a handful of lawless people exploiting democracy and human rights in order to conspire with the enemy against its sovereignty, unity and vital interests?"

The expulsion of Haidar, who was also awarded the 2008 Robert F Kennedy human rights prize for her struggle, is part of a wider crackdown on Sahrawi activists. On Monday Human Rights Watch condemned the Moroccan government for blocking "unauthorised" visits by foreigners to the homes of Sahrawi campaigners in Western Sahara. Seven other Sahrawi activists being held by Morocco after visiting the Polisario camps in October have been described as prisoners of conscience by Amnesty International.