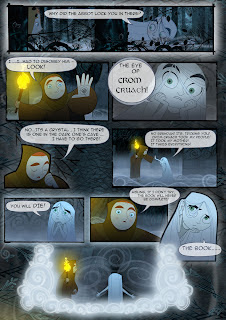 So, working on the adaptation of the film into graphic novel form, roughi9ng out the pages .
Actually its quite challenging, to faithfully adapt each scene to comics form would take much more than the two albums and I want to give a lot of room to the "new" stories at the start, the prequels about Brendan in the first album and Aisling in the second.
Truth be told those are the really interesting bits for me as its new artwork.
Most of the comics adaptation is mainly reused or reworked existing artwork so thats a different kind of challenge.
Mainly whats weird is how "cuts" don't work as easily. In film because we have time , when we cut from one scene to another, theres an automatic link, but in teh comic its kind of confusing, and I tend group panels more.
Also the publisher wants a very "classical" grid type layout which is not my usual style in comics so I'm trying to keep the more loose and experimental layouts for the prequels and go for the classical grid for the adaptation.
It kind of makes sense as the prequel is a different time and location from the rest and also the adaptation part uses a lot of artwork thats already in "boxes" , as in, screen shots designed for a rectangular screen!
Anyway, its a pile of work in a tight period and with the Song of the Sea schedule staying fixed I am up to my eyes.
But sure its all good.
Does'nt help that i fell off my bike the other night and nearly cut my ear off!
I'm working away with a very dramatic looking bandage all around my head.
Great for extra sympathy ;)
Posted by tomm at 2:01 AM