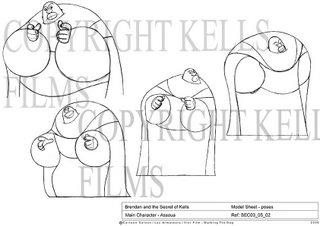 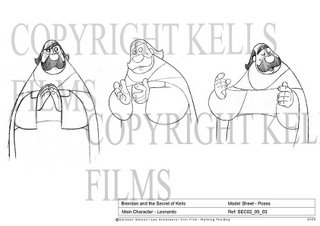 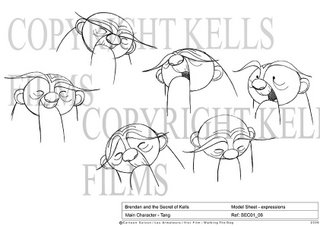 its getting so busy now its hrad to find time to think never mind post.
I hope it'll all settle down soon, its mainly just all teh new people, and a bit coming and going.
We have new a new layout guy - Marc .
The layouts are flying along, the hardest thing is feeding this crew while keeping an eye that nothing is being lost in the flurry of activity. Theres a huge amount of reuse in the layouts because of the style, somany objects are designed and then just moved around to crete different composistions in the same environment, especially in the interior scenes, so its allowing teh technical layout to go quite fast.
Its been a bit depressing in some ways seeing boards I was'nt completely finished noodling with going to layout - its much bigger deal to change things after that , so i guess I just have to let go most of the time when it gets to layout.
Cuts, composistions and so are pretty much locked from then on.
We have locked the first third of the film now animatic wise.
I am spending the day tommorow with the editor, Joe, just marking the scene lengths and stuff.
Cutting the wavs to get them onto the x-sheets.
Using Animo, we can have digital X-sheets from the word go, which is cool - very precise stuff.

Wea re installing an assest managment sodftware called "Hobsoft" that was used on Asterix and the Vikings, hopefully it will help us manage all the files that are being created between all 5 studios and it will allow us to communicate more easily too....at least thats the plan!

We have a new animator joinging us today, Jean Morel an ex-Disney guy who worked on The Lion King on Scar and on Hercules and stuff on Andreas Dejas team, thats quite exciting.
Jeans showreel is mighty impressive, so its great to have him joinging us .

Also in a few weeks in association with Barley films in Dublin, we are having a masterclass from Mike Nyugen , the director of "My Little World" and a supervisor on The Iron Giant.

Thats gonna be cool I'd say. I went to Gobelins during the week last week, amazing work there, the students all seemed to be in big demand. But hopefully one or two will join us here!

I was depressed to find I am now to old to begin training in Gobelins - I'm 29 and the cut-off is 26. So my new ambition is gonna have to be to make the Cartoon Saloon a place where I can learn as much as i might there!
So goodbye to any dreams of going to Gobelins, or being a Ballerina, or an astronaut.....sigh.

Emmmm...Bruno is starting to work on the temp track for the score this week, so thats exciting too, we have a tele-meeting set up for Thursday.
Unfortunatly we did'nt get together to go to Miltown Malbay this year for the Willie Clancy festival.

Last night i went sketching in the woods near my house with Adrien, Lili and Remi.
I'm boarding the final pass of the forest sequences now , and just to sit in a forest and sketch was very nice.
I think i'll try and do it again tommorow.

I am having to go super fast now on the boards as theres thsi trundling machine behind me that is catching up to me, and I have to keep it busy!
Its a lesson for next time - LOCK THE BOARDS BEFORE LAYOUT...ahh I always learn thehhard way I suppose.

Its been nice in some ways to say that certain thinsg are "locked" , finished and time to move on, like all the modelsheets and all - in a nice big thick package now, seems substantial.
I've uploaded a few ....

Next time....thats something on everyones minds now, thinking of what the next project will be already....

So thats a quick update after a long radio silence!