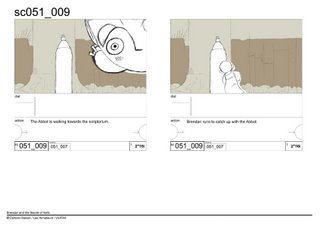 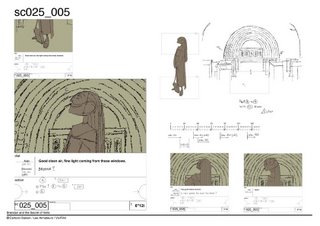 Faster faster take me to your master!
(ZigZag from the Thief talking to the crocs)

Didier , Fabrice, Ivan and Bruno Coulais came over on Tuesday.
Bruno seemed really into the artwork we showed and felt the story was working in the animatic.
He is a really nice guy and we feel lucky that he'll be working on the music.
Katia's fella organised a great night of trad music in the Pumphouse on Wednesday night and everyone had a blast. The craic was mighty and Bruno seemed really into the Irish music.

We hope he will be back for the Willie Clancy festival.
He's gonna do a temp track based on the rough stuff Nora put down on the animatic and thats really exciting - to have feeling for the score up front. Hopefully it will be inspiring for the animation and all too.


We had a party for both productions here in the studio while the guys were here and it was quite overwhelming to see all the crew - or most of it anyway in one room. 40+ people, thats some amount after years of never really being much more than 10. Cuilin seemed like a big crew for us last year!

Anyway the records are soon and we need to cast the final voices for the additional monks.
We will have the kids down on Saturday for a workshop day. Then we are meeting Brendan Gleeson and Mick Lally on the Sunday and on Monday we begin recording!
It'll be hectic , but Fabrice is gonna come over again to help with the voice directing as he's doen that before. He had some good notes on the animatic too - just tightening up lines and so on.

Tommorow I'm off to Belgium with Nora, Martin and Remi to meet the Belgian crew and work on the ink and paint tests. Its gonna be a busy few days and then we're back just in time for the records.

Layout is baring down on us with the crew starting in June, I'm gonna be boarding at least until end of July so its getting like spinning plates on sticks kinda thing.
Its a bit stressful alright but we're getting there.

I think things are still looking pretty good and if the voices are good it'll be a huge leap forward.

Didier was really cool about the blog - I was a bit worried he would'nt agree with it, but he thinks its cool. He's into linking it with the marketing site that we'll launch in September.
Adrien and Lilly have a cool idea for a Brendan game that'll be on the site so that should be cool.


Fabs will be helping out with the voice breakdown and we are gonna be up to our eyes for a few weeks after the voice records.
He's been doing soem gorgeous scenes as testers - just little chunks that are silent and don't need the final dialogue.
I've been thinking its a little less stylised animation wise than we first envisaged but looking very well.
He's flying through it so thats a good sign I hope .
Just hard to get my head around the fact that by Christmas all our animation will be done and the layout will be finished.
All the remaining work will be overseas by then.

As Katia says - once you enter the layout phase its like entering another dimension....yikes!


Anyway Ben is beside me here getting fed up so I better go!!