NB - The folowing article is an impressive analysis of the visual styles and themes in the movie.
The only correction I would say is that the writer misunderstood the name of the crystal magnifying glass in the movie. "The Eye of Crom" refers of course to the worm god Crom Cruach who Brendan battles in the movie.
Still, its impressive and flattering that someone would take the time to write about our film in such depth.

Insular Style of The Secret of Kells 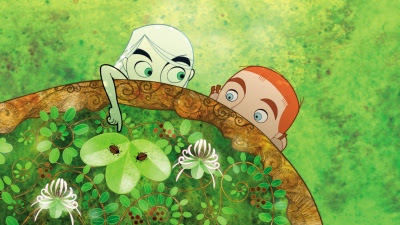 It has been some time since I sat through an animation as gorgeous as The Secret of Kells. Although highly experimental in style, the film is still accessible enough for wide range of audience to enjoy so I encourage you to take a look at this extravagant piece of art. What intrigued me the most about the film was its fascinating designs and animation inspired by the Insular Art (artistic style) of The Book of Kells, which will be the focus of this article. 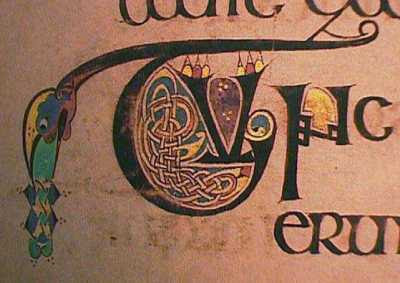 So what exactly is The Book of Kells? The history or purpose of this illuminated manuscript is not relevant to the interest of this article. What is relevant is its elegant designs and its relations to the film’s visual style. There are three main points I want to make in this post, and the first is its chaotic ‘loop’ of interlacing curves that you can see in the above picture.

‘Chaotic loop of interlacing curves’ is a pretty succinct way of describing the knots, braids and weaving found in the book. Why chaotic? Because chaos refers not to things that are random, it refers to things that are difficult to comprehend. The technique of interlacing in the book follows a number of simple rules but the actual illustrations appear chaotic because of its sheer degree of complexity. We can not fully comprehend the logic of its pattern at glance but we can instantly sense its beauty.What’s interesting about one of these ‘rules’ is how the strands of the crossings must be endless, and that no more than two strands can cross at one point. So if you focus and follow the strand (try doing it above with the picture on right), you will be stuck in an endless loop of one long strand interlacing itself. 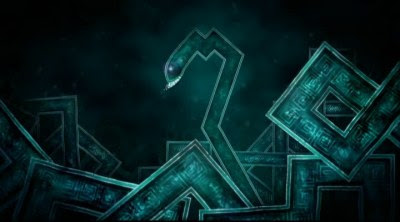 The reason why the animation of The Secret of Kells is so fascinating is because it feels much like following that interlacing strand. The way characters move, and even how each frame is composed creates that ever flowing sense of movement. You just have to see it. Ben has put it extremely well here so I’m just going to quote him:

The choreography of the movement of the characters through these compositions is quite ingenious. It’s like they’re constantly shifting perspectives on you, coming up with creative new ways for the characters to move through the environs. In that sense it kind of reminded me of The Thief and the Cobbler. Representative of this is a shot in which a character is climbing a tree. The leaves form a sort of line that divides the screen into two. The character climbs up across the left half, then passes under the line, and in the right half the perspective is suddenly different, as if they were two distinct shots. It’s unexpected and subtly done and has a marvelous effect, like a constantly shifting and shimmering optical illusion. So much thought was put into coming up with a variety of ideas to make each shot interesting like this. It’s not just the animation and art that are stylized – the directing is too. 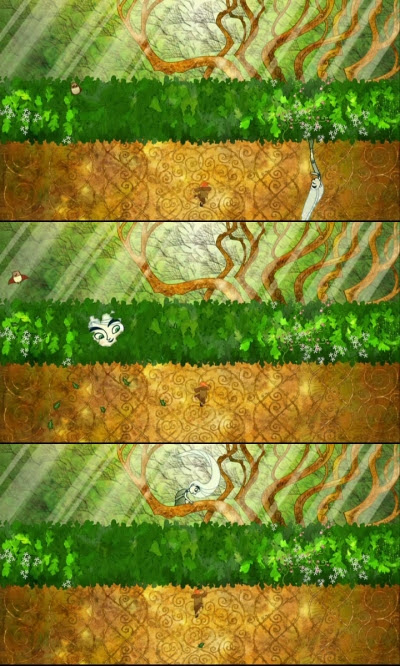 Another thing I want to add is that even the way the consecutive frames are strung together achieves similar effect. Whether it’s climbing a tree, running through a forest, or traversing the walls of the tower, one could almost imagine the camera making elegant curves as it swoops us over these landscapes. It’s like the creative staffs managed to translate the language of Insular interlacing in animation. Brilliant. 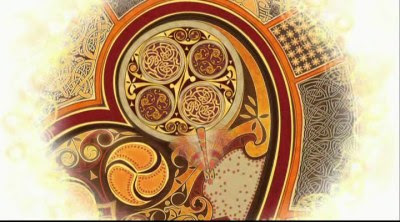 "God is in the Details" - Mies van der Rohe, the architect

Another point of interest in the book’s design is the sheer level of details. In fact some details are so meticulous, it can only be fully appreciated with a 10x magnifying glass. There is no magnifying glass in the film but there is a magical artefact called ‘The Eye of Cromwell’, a reference to the fact that the real Book of Kells was lost during the period of Oliver Cromwell.

There’s an interesting relationship between this detailing feature of the book and the way The Secret of Kells presents its landscape. Animation is beyond a 2D plane, it’s an illusion to a 3D world. Our human eyes have a limited visual perception and acuity thresholds, therefore our ability to appreciate the level of colour variations and geometric differences changes as our spatial relationship with that object also changes. This is why architects have to consider, for example, how a surface may look from both end of the spectrum. See below, how Gaudi’s surfaces are so intricate at microscopic level and yet blend in so sublimely with the bench at greater distance.

There is a particular scene in Secret of Kells that does this beautifully as well, which you can see in the below picture. At one moment we see the characters approach a giant ‘ball’ of different coloured spots. At closer inspection we find that the dots are actually butterflies fluttering about and filling that large air gap. It’s also interesting that one of its messages is ‘you learn more from the forest then inside the wall’. From far away, imprisoned by your closed minds, it’s impossible to appreciate great things. You need to open that wall, open your mind, and traverse the nature to find god, to find the truth. To paraphrase Deleuze, philosophy can only be found at the front of non-philosophy. 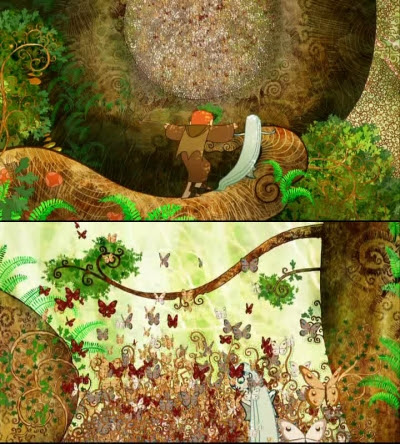 The Book of Kells is also known for mixing figurative with the ornamental (i.e. iconic pictures of people in decorative background), which continued to be the characteristics of later medieval illumination art. One of the reasons why each screens are so inviting to viewers may be that, despite highly experimental and sophisticated textures of backgrounds, they work well in harmony with more simplistic character designs. There are several other anime titles that I think are exceptional in this field too, including Kemono no Souja Erin. 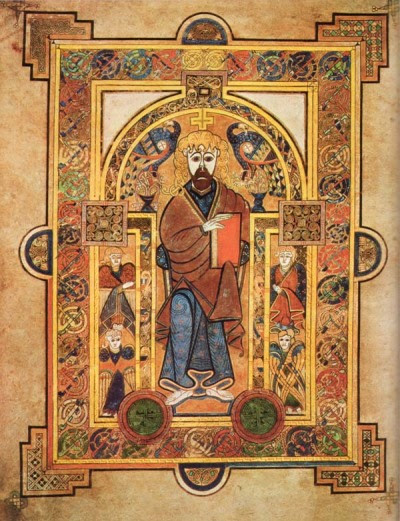 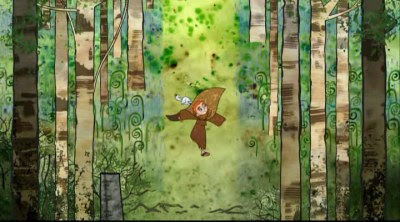 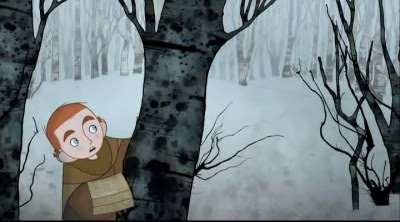 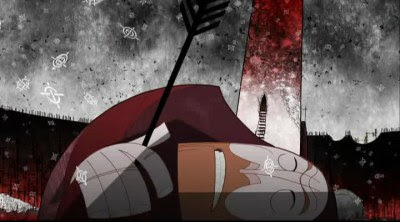 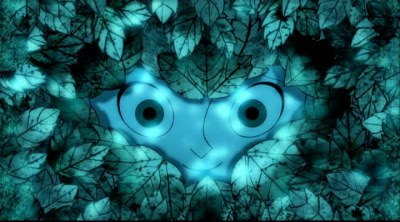 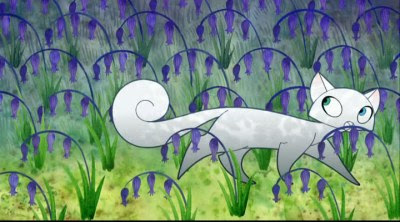 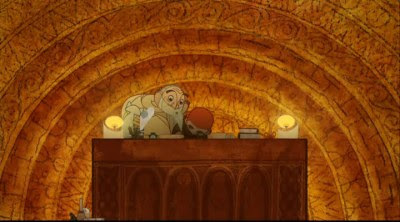 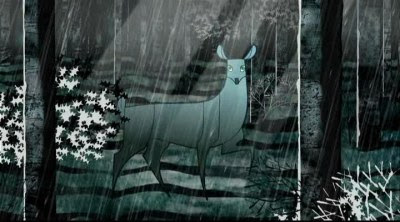 Although nothing impressive story-wise, this is definitely one of the most visually innovative animation you will likely to see. There is another point I want to mention briefly and that is its harmony between the visuals and soundtrack. It’s simply a feast for eyes and ears. It’s the kind of melancholic and beautiful harmony one would find in Kaiba and Casshern Sins (I remember talking about this type of aesthetics briefly with bateszi on MAL). I’m sure the below clip will win anyone over (also look at how the cat moves in that ‘interlacing’ movement, and how camera movement swoops the tower in similar fashion).

Posted in The Secret of Kells | 11 Comments »

11 Responses to “Insular Style of The Secret of Kells”